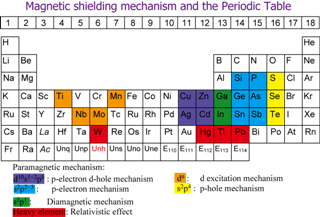 The relativistic effects, spin-orbit effect in particular, are very important for the chemical shifts of molecules including heavy elements. We have developed a method to calculate these relativistic effects. We showed for the first time that the spin-orbit effect is the dominant origin of the proton and 13C chemical shifts in the HX and CH3X (X=F, Cl, Br, I) series of molecules, respectively. We performed later the Dirac-Fock four-spinor calculations of various molecules in the magnetic field. The relativistic effects and the electron correlation effects couple strongly, so that they must be calculated at the same time.