QCRI is a research institute of quantum chemistry and through which we want to make an important contribution to science and technology and thereby to the happiness of humanity.


The 4th Japan-Czech-Slovakia (JCS) Symposium on Theoretical Chemistry was actively held at the Liblice Castle, situated north of Praha, in May 18-20, 2011. About 70 theoretical chemists, from Czech, Slovakia, and Japan attended and discussed in very friendly and active atmosphere. We would like to thank greatly Prof. Lubomir Rulisek and Prof. Jiri Pittner for organizing the JCS symposium so nicely. We would also like to thank the Ambassador Toshio Kunikata, and the staffs of the Japan Embassy in Praha for generous support and all participants for active and freindly scientific atmosphere.

-> The web site of the 4th JCS Symposium on Theoretical Chemistry is here.
-> Photoalbum of the symposium is now open here.
-> The success of the congress is reported in Bulletin of the Academy of Sciences of the Czech Republic. You can download it from here.


about JCS Symposium on Theoretical Chemistry
Prof. Havlas and Prof. Nakatsuji initiated the JCS symposium based on the high-level scientific relationship and warm friendship among Japanese, Czech and Slovak theoretical chemists. Three previous symposium were held at Praha in Czech Republic (2005), Kyoto in Japan (2007) and Bratislava in Slovakia (2009).

The 5th JCS symposium on Theoretical Chemistry is going to be held at Nara Prefectural New Public Hall in May 22-24, 2013. If you are interested, please join the symposium with us. 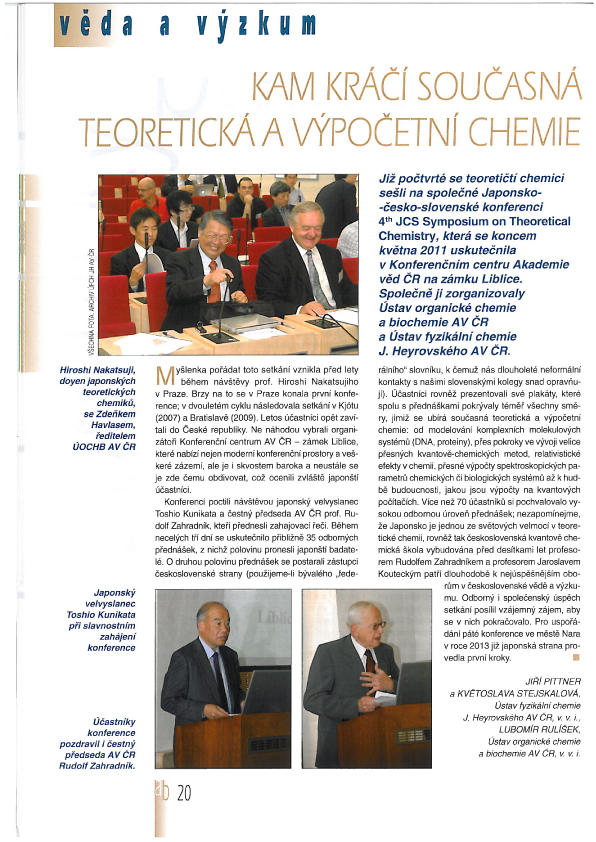 (Take from Bulletin of the Academy of Sciences of the Czech Republic p.20, Jun-Aug issue (2011))

Our dream can be briefly expressed as "Proposing Highly-Original Theory in Chemistry". We are realizing this dream through the active discussions in the laboratory.

Theoretical approaches can directly investigate the essential part of the chemical phenomena, which is a great advantage over the experimental studies. This is because theoretical study is free from the restrictions such as the limitation in the experimental facilities, conditions, and chemical reagents.

With this basic standpoint, we are studying

These studies have received a high acclaim from worldwide academic societies.

In order to apply our theories to the actual complex system, we are also focusing on the high-performance computing by developing efficient computational algorithm and software.


Quantum principles like Schrödinger equation govern chemistry, biology and physics of matter, but have been believed to be insoluble for most actual systems for over 80 years since their birth. Recently, a general method of solving these basic equations has been discovered by us. In this project, this theory will further be advanced to realize truly predictive science and quantum chemistry with innovative methodologies in computational science. Our SAC/SAC-CI method will further be expanded to be seamlessly applicable even to giant molecular systems in the designs of photo electronic processes.


Annual Report for Research Work in the fiscal year 2008